Nevada CD4 Congressman Steven Horsford admitted he engaged in an affair with Gabriela Linder over the past 11 years, from 2009 until just within the last month. “I’m deeply sorry to all of those who have been impacted by this very poor decision, most importantly my wife and family. Out of concern for my family during this challenging time, I ask that our privacy is respected.”

Linder told other news outlets “If this was a story in 2018, he wouldn’t have run. He obtained this position under false pretenses that he was a family man and man of God. He should take a step back, atone, and if people are satisfied, then he can come back into politics.”

Linder asked Horsford to appear on her podcast but on May 9, under her “Love Jones” Twitter handle, tweeted his alleged response. She wrote, “In response to the request from my production team to come on the show, @RepHorsford emailed me directly advising he retained Howard Schiffman with Schulte Roth & Zabel and to contact him directly to ‘resolve this matter’ and that ‘failing to resolve this is going to be damaging to everyone.”

Linder was 21 when she first started having an affair with Horsford, who was 36 at the time. She said, “He knew how in love with him I was, and he knew what he could do and get away with. He knows I would support him. He never told me to keep quiet. He didn’t have to. He knew I was loyal to a fault.” 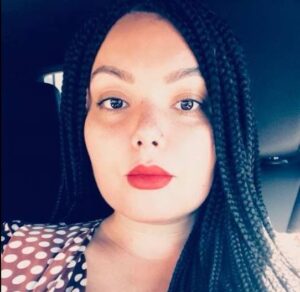 Linder graduated from St. Thomas Law School in 2014 according to her Facebook page but to date she isn’t listed as lawyer with the Nevada Bar. According to reports she works for a personal injury lawyer in Nevada. 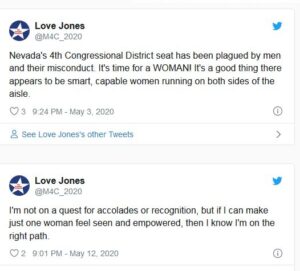 Republican Congressional Candidate Jim Marchant Said “I’m calling for a bipartisan investigation into whether Mr. Horsford abused his position by asking supporters to provide Ms. Linder with  jobs to buy her silence for the past decade?”

“First, I call on Steven Horsford to resign from congress. In addition, I call on the House Ethics Committee to begin an immediate investigation into Congressman Horsford’s actions as they relate to this longtime, extramarital affair, similar to the investigation that occurred with his immediate predecessor, disgraced former Congressman Ruben Kihuen.  The people of Nevada’s 4th District deserve to know if any of our taxpayer dollars funded Steven Horsford’s nefarious activities. I speak to voters every single day who do not feel like they are being heard by Congressman Steven Horsford. His lack of community involvement was a key factor in my deciding to run for this position. Given this news, I am infuriated. I am infuriated for Nevadans of the 4th district. This just solidifies what we already knew: that we deserve better representation. We are in the middle of an economic and health crisis. Nevada’s economy has taken a beating and our community is on the ropes. We have nearly 500,000 Nevadans on unemployment. Our largest sources of revenue for the state: tourism, hospitality, gaming, and mining, have been severely impacted with a long road to recovery. We need a strong leader who is going to be 110 percent focused on rebuilding our economy and taking swift action FOR the people. This seat has been plagued by distractions and scandals by men who cannot stay focused on their responsibilities because they are too busy chasing women. Horsford is not fit to lead us. His family will be in my prayers.” 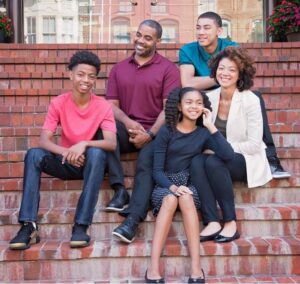