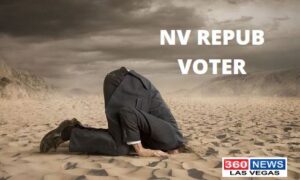 To say that the 2020 elections are rigged and illegitimate is an understatement. Four years of fraud and corruption are already baked in to this election before the election was turned into a all mail in ballot. Its already over unless the courts step in. 222,000 inactive voters, mostly dead, illegal aliens and people who never existed are now being sent mail-in -ballots.

1.It all started back in March 2017 when Cegavske signed a deal with Mi Familia Vota Education Fund to require the DMV to accept all voter registrations, even from non-citizens and pass those on to the county elections department and Secretary of State’s office.

2. Then the Clark County Elections Department in November 2017; they said “We do not have access to any database which can identify legal and illegal aliens in our voter registration system. Therefore, we do not have the ability to provide the records listed in your public information request.”

3. Then in 2018 QUESTION 5 passes: Automatic Voter Registration at the DMV. The new law requires the Secretary of State and DMV to establish a system that would automatically register EVERYONE to vote when they submit a new application, renewal or change or address for a license or identification card. Only by opting out would a person be able to decline.

4. March 24, 2020 Cegavske illegally changes the June Primary Election to a mail in ballot election and if the CV 19 virus remains an ongoing issue then the November general election will also be a mail-in-ballot election, just like California.

5. In April 2020, the DNC sued the Nevada Secretary of State to compel Cegavske to send everyone, even inactive voters, mail in ballot and to allow ballot harvesting.

6. May 2020, Clark County Registrar Voters signs off on deal with the DNC to allow ballot harvesting. Cegavske doesn’t say a peep.

The fact is Cegavske has never prosecuted one Democrat or pro Democrat group for allowing non-citizens and felons to register people to vote but she’s prosecuted Republican voter groups including one supported by Steve Wynn. Cegavske blocked the Green Party from registering as a minor party in the 2016 general election which would have helped Pres. Trump and helped Adam Laxalt in 2018. It’s clear now that Cegavske, who ran a 7Eleven convenience store before becoming NV SOS, helped Sisolak and the Dems in 2018 by titling the voter registration system in their favor in 2017. And it’s clear now, unless stopped by a court, Cegavske’s efforts this cycle have already secured Dems victory this November.