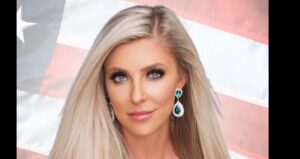 Mendenhall is also a small business owner of Elite Expo Talent Agency, a model and talent agency for conventions and other events. She describes herself as “a strong Christian, lifelong conservative” and supporter of former President Donald Trump.

Last week, whiles Dems and the Media celebrated Kataluna Enriquez, as the first transgender to be crowned Miss Nevada USA, thousands of women in Nevada were outraged by the obvious politically charged event.