JUSTICE? NO DEATH PENALTY FOR ILLEGAL ALIEN WHO MURDERED 4 NEVADANS

JUSTICE? NO DEATH PENALTY FOR ILLEGAL ALIEN WHO MURDERED 4 NEVADANS 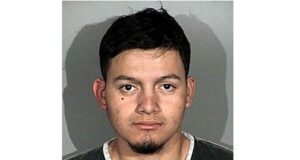 Last month the Supreme Court gutted the Nevada’s Death penalty law overturning a murderer’s case because his 40 year old prior conviction was dismissed in New York. Douglas County DA cited that recent case as his reasoning for taking a life sentence plea deal from Wilbur Guzman this week. But is that justice for the families? Life doesn’t always mean life. Some future Socialist Democrat like Newsom may come along and commute his sentence and let him out.

Wilbur Ernesto Martinez-Guzman, a 20-year-old illegal alien from El Salvador, was charged with murdering 56-year-old Connie Koontz, 74-year-old Sophia Renken, 81-year-old Gerald David, and his 80-year-old wife, Sharon David, between January 10 and 15 after prosecutors said he was looking to steal money from his victims to buy more meth.

The state of Nevada had sought the death penalty against Martinez-Guzman but his defense argued that he was “mentally disabled” and thus ineligible for the death penalty.
Last week, Washoe County District Attorney Chris Hicks and Douglas County District Attorney Mark Jackson announced that Martinez-Guzman would be pleading guilty to all four murders, as well as pleading guilty to related burglary and firearm charges.
As a result, Martinez-Guzman has agreed to accept four consecutive life in prison sentences without parole and an additional 214 years in prison for the related crimes, according to Hicks and Jackson.
Larry David, the son of Gerald and Sharon David, said he and his family “fully support … this weighty decision” to accept life in prison for their parents’ murderer. The Davids are survived by four children, 11 grandchildren, and 21 great-grandchildren.
“From the point from which this horrific event took place for all of us … our hearts are broken,” David said. “And the pain that endures will never be ending.”
“While no verdict will ever bring healing … as a family, we do trust God that he has carried us and that he will continue to go before each and every one of us,” he continued.
In January 2019, days after New Years, Martinez-Guzman stole a handgun from the Davids who had hired him to landscape their property. Police said Martinez-Guzman used the handgun to then murder Koontz and Renken, whom he robbed for drug money, before returning to the Davids’ home to murder them as well.
The Angel Family of Gerald and Sharon David, a month later, were honored at then-President Trump’s State of the Union address.
“I will never forget, and I will fight for the memory of Gerald and Sharon, that it should never happen again,” Trump said. “Not one more American life should be lost because our nation failed to control its very dangerous border.”