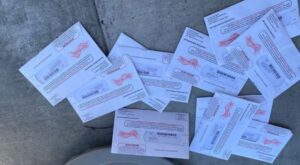 The first thing right out of the gate at Gov. Sisolak’s 2nd special session Dems press for mail-in-ballots. AB4 literally steals the powers over elections from the Nevada Secretary of State and gives them to the Governor during an emergency. The Dems held hearings last night at 10pm on Friday night in case you missed it. The proposed law blatantly violates the State Constitution which provides the Nevada Secretary of State with that exclusive power.

Under Nevada’s Constitution the Secretary of State Powers—Responsible for overseeing elections, commercial recordings, securities, and notaries. She is duly elected by the entire state to administer and enforce the election laws of the state. So she has the exclusive powers, not the Governor, to determine if an election should or should not be changed to a mail in ballot election if allowed by law.

The bill codifies mail-in-ballots and ballot harvesting. So when it takes 2 weeks to count the votes after a mail in ballot election, partisans can gather more votes to overcome any shortfall giving the party in power the ability to steal the election.

Less than two months ago the state held an exclusive mail-in-ballot primary election. 10,000 folks were disenfranchised, their votes were thrown in the garbage because of signature issues. 18k ballots were mailed out to dead people. Over 5k ballots were mailed to out of state addresses. Thousands of registered voters never received their ballots at all. And in the end, voters were forced to wait up to 6 hours in lines at the elections department to turn in their ballots. So much for social distancing.