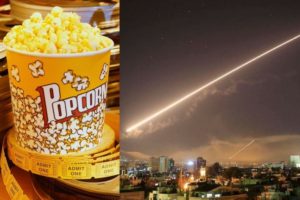 Watching the news media and pentagon spokespeople this morning report on President Trump’s missile strike in Syrian last night made me think this strike was about as useful as a two legged jackass. It’s great popcorn theater. It was cool and exciting to see a $1 Billion worth of tomahawk missiles streak across the skies of a foreign country and strike empty buildings.

That’s right folks. The buildings struck have been empty since the Israelis targeted them last year and before we gave them 10 days notice before bombing them. We could have just purchased the buildings and knocked them down for the price of a few goats. After the dust settles, Syrian President Bashar Hafez al-Assad will still be alive and still be in power. The Syrian War between Russia and Iran and U.S. backs rebels will continue to rage. And 2 weeks from we all will be focused on the next shiny object.

I would also like to point out the complete Bull shit of the fake outrage at Assad gassing his own people but not a peep about him killing some reported 500,000 civilians with conventional weapons. Do dead civilians really care if they are killed by bombs, guns, artillery or gas? Assad has leveled entire neighborhoods with artillery. Do you think kids taking a week to die, stuck under ruble of a collapsed apartment building, is any more humane than a gas attack?

I agree that we must stand up and defend the innocent around the world from Nazi like atrocities. But this was just a bloodless Friday night popcorn show. Mr. Trump you can do better than this.