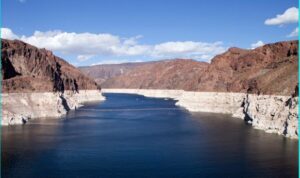 Every day in the news we watch our beloved Lake Mead’s water level continue to recede. And Democrats blame you for taking long showers, watering your lawns and filling your pools. They blame developers for building new homes. Water levels are so low, mob bodies from the 70’s are popping up. But what they never mention are real solutions to the pending water crisis. The Romans built aqueducts 2,000 years ago to provide water to their cities. California built an aqueduct 100 years ago that made LA possible today.

California environmentalists have shut down all new water projects. We don’t have a water problem. We have Democrat problem. Its not a climate crisis. It’s a man-made crisis.

The west deeply depends on the Colorado River. California currently uses 8 times its legal allotment of water. In other words, they are using Nevada’s water. But that water is now stretched thin by growth. But there are real solutions which Democrats never mention and are fighting every step of the way.

The Middle East, including Israel, have successfully turned deserts into lush green new cities. Israel has developed technology to capture water from the air. There’s new technology that recycles water used in agriculture. 80% of Nevada’s water is currently used agriculture and only about 18% is consumed by residential users.

Just this month, the California extremists blocked the construction of a brand new $1.4 billion desalination plant in Southern California claiming “it may hurt the Pacific Coast”. The state’s Coastal Commission voted unanimously to deny a permit for Poseidon Water to build a plant to produce 50m gallons of water a day in Huntington Beach, south-east of Los Angeles. 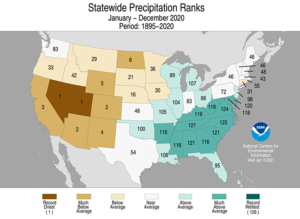 Next, we can build a water pipeline from the Midwest which just dumps millions of gallons of run off into the Mississippi river and Ohio rivers. See average national precipitation map. We just need to pipe water about 700 miles to the beginning of the Colorado River. But Democrats never mention this option. I’m sure they’ll find an obscure lizard fish that depends on the runoff water. Perhaps Dems will support it if we call it “water equity”. And demand that the water rich states need to share with water poor states to offset historic environmental injustices.

So then what about recycling water? Nope, California Democrats are blocking that too. According to the CA Globe:

“Researchers estimate that California has the potential to substantially boost local water supplies by capturing storm water and storing it in aquifers, instead of allowing it to run off the landscape. Depending on whether it’s a dry year or a wet year, they said, the state could capture between 580,000 and 3 million acre-feet of stormwater in urban areas.”

“California now recycles about 23% of its municipal wastewater, an estimated 728,000 acre-feet, the report said, and has the potential to more than triple the amount that is recycled and reused.”

Once again California Democrats blocked the construction of any new water storage basins to capture rain and snow runoff water.

So what’s their plan? De-population and control. Democrats want to use the “water crisis” they are creating to kill off half the agriculture industry in California. They not only want to stop all new development but drive people out of California then clear the homes and communities from the earth.

California which once was the symbol of the American dream where people moved seeking prosperity and wealth is now taken over by Soviet style environmentalists committed to their anti-growth and anti-human agenda. Of course, their lives are valuable because they are enlightened. But all of you month breathers are non-essential and now disposable.