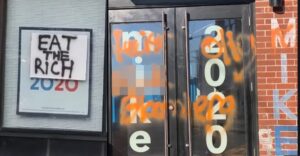 “We don’t know who is responsible for this vandalism, but we do know it echoes language from the Sanders campaign and its supporters,” Bloomberg campaign Kevin Sheekey said.

Skeekey went on to say “Over the past week, we’ve seen similar attacks against Mike Bloomberg 2020 offices in multiple states. Fortunately, no one has been injured. But this needs to end before someone gets hurt,”

Earlier this month a Sanders Supporter was arrested for vandalizing a Republican office.