CORRUPTION: THE REAL STORY WHY NV’S CV19 SHUTDOWN WAS AVOIDABLE 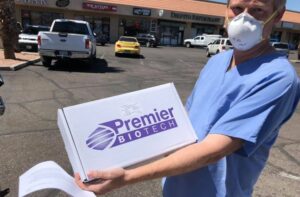 As COVID 19 started to spread throughout Southern Nevada in early March 2020, a local Urgent Care Doctor reached out to a college from his past at a company that just obtained FDA approval for instant CV19 test kits. The Urgent Care center purchased about a thousand CV19 Rapid Test kits. Rapid COVID-19 Tests Distributed by Premier Biotech has a 97% accuracy rate.

These new FDA Rapid test kits where based on the testing model for Diabetes. They only required a prick of the finger, a drop of blood placed on the test strip and in 10 to 15 minutes you had 97% accurate results. The FDA approved the use of the Rapid Test kits for medical staff like nurses and doctors to administer. Sahara West Urgent Care set up the first of its kind in Nevada, drive thru CV19 testing in their parking lot. Mind you, no one else in the State at the time had Rapid test kits like these. Even UNLV came by to see their drive thru testing protocols. 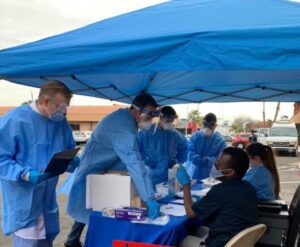 From March 13 thru March 15th, Sahara Urgent Care tested over 900 patients in their first 3 days. Positives were reported to the State Health Department and are part of the overall numbers still to this day. Before they started their CV19 testing they tried to call the local Health Department authorities and even sent emails and notifications by fax. But all those folks were working from home and did not respond until they did. All this happened before the Gov. ordered the shutdown of the Nevada economy on March 23, 2020 and then extended it again for two more months.

Sahara Urgent Care had access to unlimited numbers of these instant test kits back in March at the time they ran their drive thru tests when the Governor sent his regulators to shut them down. The State issued a cease and desist letter threatening legal and criminal action. Why; supposedly because the Urgent Care didn’t have a licensed “Lab” on site. Mind you no other state in the country required any such lab license to administer this instant CV19 test and the FDA approved its use without a “Lab”.

More than a month later, UMC started offering drive thru testing with cotton swaps saliva testing, not the instant 15 minute Rapid tests. Those tests took up to 14 days to get results back from the lab. But even worse, Sahara Urgent Care offered to help the State Health Department obtain the instant Rapid test kits even if they couldn’t administer them. The State never replied back.

Imagine if the Governor had embraced the Rapid test kits and flooded Nevada with them at the beginning of March, instantly identifying those who were infected, isolating them and treating them. That was the key to Germany and South Korea’s success. Instead, Governor Sisolak shut them down in order to eliminate UMC and UNLV’s competition. Hundreds of Nevadans died due to the State’s slow response and political corruption in this case.

Urgent Care & Wellness spokesman, Andrew Mann said “The entire shut down could have been avoided if we were allowed to continue to test thousands of people successfully”.