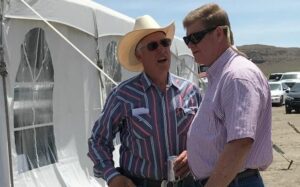 Nevada’s sole Republican Congressman, Mark Amodei, voted with Nancy Pelosi on February 14, 2019 and against President Trump for a bill friendly to Cartels and human traffickers. According to Conservative Review “Perhaps the worst aspect of this law is a section that will grant de facto amnesty to illegal immigrants. Section 224(a) prohibits the deportation of anyone who is sponsoring an “unaccompanied” minor illegal alien – or who says they might sponsor a UAC, or lives in a household with a UAC, or a household that potentially might sponsor a UAC.”

Then, on June 6, 2019, Amodei voted again with Nancy Pelosi to “Pass a $19 billion spending bill without funding for the border crisis” again over President Trump’s objections.

Now Amodei is promoting a new amnesty bill to provide a pathway to citizenship for over 385,000 illegal alien farm workers. For decades Republicans have supported seasonal work permits for people to come to the U.S., work on farms and then return home to their country of origin. Everyone was happy with this arrangement until the Democrats discovered a new voting block they could control with welfare and other tax payer funded giveaways to buy their votes.

Now Amodei is co-sponsoring the Farm Workforce Modernization Act. Amodei said before a LV Chamber of Commerce Group “It has as good a start in a bipartisan sense that I think you can have”.

But Conservatives are pushing back stating “Solid Red States are now purple or even blue after previous amnesty deals”.

According to migrant worker data sites “There are estimated to be between 1 and 2.7 million hired farm workers in the US, including migrant, seasonal, year-round, and guest program workers.”