In a NEWSMAXTV studio interview, Assemblyman John Moore provided a detailed account of how Majority Leader Paul Anderson slipped Moore cash in a private meeting. Cash that Anderson failed to report on his 2015 annual report file stamped January 15, 2016. A couple of months ago NEWSMAXTV LAS VEGAS served Anderson with a Freedom of Information Request for receipts for some $46,000 in expenditures that he paid to himself and his credit cards while failing to disclose the vendors names.

On May 5, 2016, Nevada Assembly Majority Leader Paul Anderson, using taxpayer funded government lawyers, sent NEWSMAXTV LAS VEGAS a letter refusing to turn over receipts for $46,000 in donor money he paid himself and two credit cards. In a letter the Legislative Counsel Bureau sent NEWSMAXTV LAS VEGAS, Anderson claimed he assert legal privilege that shields him from such disclosures.

According to Assemblyman John Moore, Anderson invited Moore to his company’s office in Summerlin. Moore said it was there that Anderson gave him three prepaid credit cards pre-loaded with $500 each, plus $300 cash for a grand total of $1,800. Anderson told Moore “This money is from one guy to another. This is not an official donation.” According to legal experts, Anderson failed to report the $1,800, as required by law. Any money over $100 that is given from one elected official to another elected official is required to be reported in periodical reports submitted to the Nevada Secretary of State.  The incident occurred on or about January 1, 2015 according to Moore’s report who did report the $1,800 on his 2015 Annual Disclosure form. 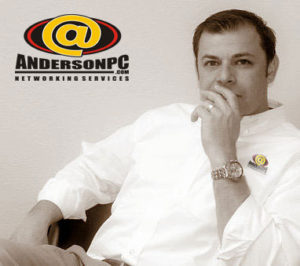 According to Moore, the money Anderson gave him sparked a confrontation later that year in committee when Moore refused to vote for a bill leading Anderson to verbally assault Moore in a stairwell outside the Committee room. According to Moore’s account, Anderson yelled at him and physically tried to prevent Moore from leaving, forcing Moore to grab Anderson and shove him out of the way. Moore claims he filed a police report with Capitol Police who never followed up and seemed to have lost the police report. There was a camera in the stairwell but that is also missing, supposedly.

Moore said he filed an ethics complaint, regarding the cash Anderson slipped him, to the proper authorities.

We asked Majority Leader Paul Anderson for comment and never heard back.

Assemblyman Ira Hansen said “I contacted the Secretary of State’s office today seeking a full and open audit of all of Anderson’s financial issues.” 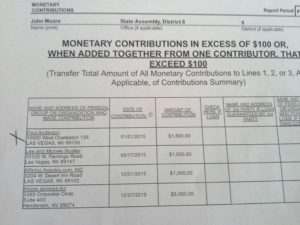