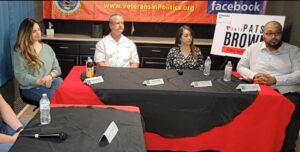 Jay “Coach” Calhoun, an actual parent of three kids in CCSD and a High School Coach at CCSD until CV, pushed parents’ rights against current Trustee Danielle Ford, who defended the school district’s record. Ford tried to explain away CCSD’s ranking of 49th in the country blaming parents for “truancy” and Vegas as transient. Trustee Danielle Ford said if you take away the low graduation numbers, the high truancy numbers and Vegas’ transient community we would actually be 32 in the nation.

But Danielle has been a full throated supporter of Restorative Justice which does not punish kids for violating rules. In fact the Superintendent just declared Restorative Justice dead this week after a teacher was strangled and raped by a student. Over 1k teachers are out the door because of the violence in our schools. Over 177 kids reported sexual assaults on CCSD campus this school year alone. Over 5k assaults reported, Ford continues to defend her record and Restorative Justice. 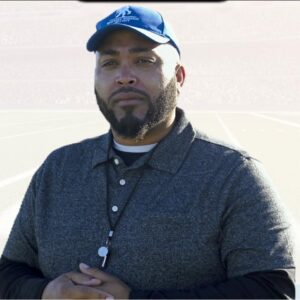 Jay “Coach” Calhoun, an Army Veteran and High School Football coach at CCSD made it clear that he would instill discipline and hold kids accountable. Coach Calhoun went on to say Parents need a bill of rights putting them in charge of our schools. Ford voted for CRT and transgender policies and sex ed without parental oversight.