After 360 published a story yesterday at 9:39 am about President Trump’s reelection team investigating the CCRP and David Sajdak for allow Chinese knockoff MAGA merchandise to be sold at official Republican events, someone (allegedly) using the official Clark County Republican Party Twitter account, at 10:02 am, Tweeted out a vulgar tweet aimed at President Trump.

No one is taking responsibility for the vulgar Tweet sent out yesterday even though a screen shot was saved, according to numerous Republicans who saw. Who’s lying? Chair Sajdak refuses to respond to requests for comment. 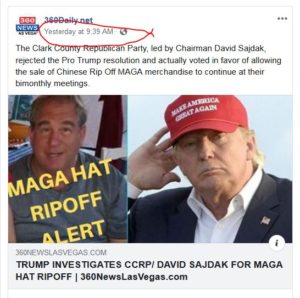