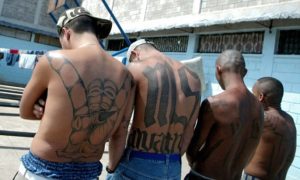 Yesterday, after hiding some ten MS-13 murders from the public over the past year, and after Laura Loomer and 360Daily.net exposed those murders over the weekend; Lombardo held a CYA election year press conference. In yesterday’s presser, Lombardo admitted that yes there were at least ten violent gang murders that they know of, that’s ten Vegas citizens killed by illegal alien gang bangers he concealed from the public over the last year.

Its an election year, so ten MS 13 gang murders isn’t something he’s quick to draw attention to. As with the Vegas Mass Shooting and now the MS-13 mass murders, Sheriff Lombardo desperately seeks to control the flow of news out of his department to his own determined. Transparency equals integrity.

Since Lombardo became Sheriff, the murder rate has spike by over 120% as of last year. Lombardo falsely claimed in January of this year, that there were 141 murders in Clark County in 2017. Not only did he fail to count the Vegas Mass Shooting victims, he failed to count these 10 murdered Vegas citizens in that report, according to the Clark County Coroner.

Many inside Metro blamed Lombardo for breaking up the gang unit in 2015 for the spike in murders. And last year Lombardo put the unit back together and its already showing great results. But Lombardo has focused on progressive polices that protect illegal aliens from arrest solely based on immigration status, includes MS13 gang members.

According to law enforcement estimates, there are about 600 gangs with 20,000 members if not more in Southern Nevada.

Lombardo and other liberal politicians have been arguing for years, that by going soft on illegal aliens, the police would get more cooperating witnesses. But instead MS-13 gangs exploited those sanctuary city policies like Lombardo’s, by preying on the illegal alien community with impunity and using murder to keep them in line. There already is a program in place to give illegal aliens a special green card if they testify against criminals. The program should be marketed and advertised in the immigrant communities instead of sanctuary polices that actual fail to remove dangerous violent criminal gangs from those communities and from the country.

If immigrant communities were confident that the police would arrest and detain illegal alien criminals like the MS-13 gang members, then those communities would be more willing to step forward and testify against those victimizing them.

Lombardo could use immigration status to hold MS13 gang members who are in the country illegally instead of ignoring it. In fact the US Supreme Court just ruled that illegal aliens can be held indefinitely without bail, solely based on their immigration status.

If Sheriff Lombardo’s first priority was to reduce the 120% massive spike in the murder rate in Las Vegas under his watch, and not election year political correctness, he would detain all illegal aliens his officers arrested rather than releasing half of them, as he has repeatedly said he is doing. Lombardo has blamed the Trump administration for not picking up 40% of the illegal aliens Metro officers arrest and identify. So Lombardo has been releasing them back onto our streets.

The MS-13 mass murders now prove Lomdaro’s catch and release sanctuary polices have failed to protect the people of Las Vegas. And they failed to protect immigrant in our communities who ended up being the murder victims in this case.