THE REAL QUESTION ABOUT KAVANAUGH IS, IF HE DID IT 35 YRS AGO SHOULD IT MATTER?

THE REAL QUESTION ABOUT KAVANAUGH IS, IF HE DID IT 35 YRS AGO SHOULD IT MATTER? 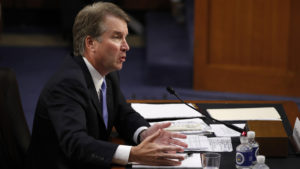 U.S. Supreme Court nominee Judge Kavanaugh was accused last week of getting drunk at a pool party 35 years old when he was about 16 years old and having sex with drunk girl who now claims rape. The Judge is denying the unprovable claims. But the real question is, should it matter if he did what she claims happened?

If Judge Kavanaugh did everything he is accused of doing when he was 16 years old and since then he has never repeated the offense, he’s been a great husband, a great father and a successful citizen contributing to our society does one drunken mistake disqualify a person for life from serving in a high position in our government?

Certainly if he repeated the offense over his life and certainly if he repeated the offense recently then most people would say yes. But the idea of redemption and forgiveness seems not to apply to certain people in our society, specifically men. But when one bad act or one bad comment on Facebook in our life is held against us forever then how many of us will be worthy to serve? Making mistakes in life, even criminal mistakes, can often make us better people in the end as long as we grow from what we learn. Almost every super rich person has failed and filed BK in their life at some point. Failure is the best lesson in life and often necessary to becoming successful.

So I would say yes he is qualified to serve on the U.S. Supreme Court, even if he did everything his accuser claims happened 35 years ago.