A “Distant Early Warning” From Illinois

A “Distant Early Warning” From Illinois 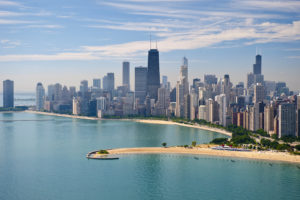 Two weeks ago, Texas was the first state to hold its primary for the 2018 midterm elections. Last night, Illinois held its primary. And just like Texas, the Illinois results are pointing towards a much higher degree of Democratic enthusiasm than was present for the primaries for the 2010 or 2014 midterm elections – enthusiasm that could impact the outcome of quite a few races this fall.

Is a Democratic wave forming?

(UPDATE #2 3/21 AM) While Illinois (particularly within the lion’s share of the population residing in the Chicago media market) has generally not been friendly territory for Republicans since 1992, the fact that it has open primaries means that benchmarks can be established as to the extent of enthusiasm for either major party in a given election cycle. In 2010, 56% selected a Democratic primary ballot, while 63% selected a Republican ballot in 2014. With 99% of the vote in, JMC estimates that when all the votes are counted, 64% will vote in the Democratic primary, with Democratic turnout 156% higher than it was in 2014, while Republican turnout is 18% less than it was in 2014.

The Illinois numbers are not a fluke: in last year’s primaries in Virginia and New Jersey, 60% chose a Democratic ballot in Virginia, while 67% did in New Jersey (Democrats posted big wins in both states in the general elections that fall). And while Texas had a 60% Republican primary electorate two weeks ago, Democratic turnout increased 87% over 2014, while Republican turnout increased 15%.

(UPDATE #2 3/21 AM) As a side note: incumbents who have not sufficiently kept their party’s base voters happy faced stiff challenges last night, as two incumbents barely made it through their primaries. Republican governor Bruce Rauner only won his primary 51-49% against a much more conservative challenger, while Democratic Congressman Dan Lipinski barely turned back a more liberal challenger 51-49% in his primary – in a district that he and his father have held continuously for 36 years.

And unlike Texas, where Democratic enthusiasm was confined to a handful of urban Congressional districts (some of which, however, are Republican held Congressional seats in affluent areas of Houston and Dallas), Democrats saw more widespread support across the state, with a whopping 85% of voters in Cook County (Chicago and inner suburbs) choosing a Democratic ballot, while 49% of primary voters in more Republican friendly downstate Illinois (as well as the Chicago suburbs) voted in the Democratic primary.

It’s therefore a combination of these primary results, Democratic legislative victories, near misses in Republican held U.S. House seats, and an upset win in a special Congressional election in Pennsylvania last week that all point towards an unfavorable election cycle for the GOP this November.

Even though only Texas and Illinois have conducted their primaries so far, Democratic enthusiasm has manifested itself in another way: increased interest in competing in Republican held seats. As of today, 22 states representing 42% of House seats have concluded their candidate filing, and it is here where there is additional evidence of heightened Democratic enthusiasm: 120 of 122 (98%) Republicans in those states have Democratic opposition, while 52 out of 62 Democrats (84%) have a Republican opponent.

By the end of April, 12 more states representing another 36% of House seats will complete Congressional filing. The elections front will be much quieter in the near future, as the next primary date isn’t until May 8, when four states (Indiana, North Carolina, Ohio, and West Virginia) hold their primaries. And the next Congressional special election isn’t until April 24 for an open Republican held Congressional seat in suburban Phoenix, Arizona that voted 53-42% for Donald Trump. This will be yet another test of partisan strength, and as was mentioned in the last article a 53% Trump percentage in today’s political climate does not correlate to a secure Republican district.

Even though primary season doesn’t heat up until May 8, there is enough accumulated data to point to a challenging year for Republicans that has not been encountered since 2008, 2006, or even 1982. Republican incumbents would therefore be wise to prepare themselves for this heightened level of Democratic enthusiasm.