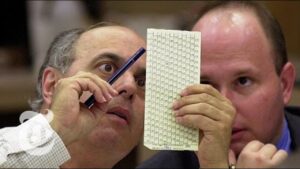 According to the Nevada Secretary of State’s website, Joe Biden’s margin of victory was a little over 39,000 votes state wide. Following the election, the Trump campaign sued to strike some 4k votes from non-citizens, 19k votes from vacant lots, 1,500 votes from dead people, 15k votes from out of state voters and 84K votes from folks who double voted. Carson City Nevada District Court Judge Russell dismissed the case citing insufficient evidence. But one category they missed was adjudicated ballots.

Adjudicated ballots are ballots where the voter’s intent is unclear because of voters’ errors including, an X marked instead of filling in the circle for the candidate, voting for both candidates in a given race, crossed out votes and other serious issues where the intent of the voter is unclear. Remember the hanging chads in Florida? Same issues except with paper ballots where its extremely difficult to determine whom the voter actual intended to vote for.

According to the US Supreme Court Case in 2000, Bush v. Gore, all 56,000 adjudicated ballots are illegal votes. November 10, 2000, the machine recount was complete, and Bush’s lead stood at 327 votes out of six million cast. County officials tried to discern voter intent through a cloud of “hanging chads” (incompletely punched paper ballots) and “pregnant chads” (paper ballots that were dimpled, but not pierced, during the voting process), as well as “overvotes” (ballots that recorded multiple votes for the same office) and votes” (ballots that recorded no vote for a given office). The Bush campaign immediately filed suit, and the U.S. Supreme Court issued a writ of certiorari to take up the case the following day. On December 9, in a 5–4 decision, the U.S. Supreme Court ruled in the case of Bush v. Gore that the manual recounts must halt, and it agreed to hear oral arguments from both parties. Supreme Court overturned the Florida decision, holding that the various methods and standards of the recount process violated the equal protection clause of the U.S. Constitution.

Last month, Political Consultant Lisa Mayo lead Clark County Commission Candidate Stavros Anthony’s recount effort, at a cost of $80,000. During that process Lisa came across over 139 adjudicated ballots in Stavros’s race, which we’ve provided a sample of three below. One ballot had Stavros’s name crossed off and Ross’s filled in. This was after the person voted for Trump, Marchant, April Becker, in other words a straight Republican ticket. Clark County Elections Department almost always gave the adjudicated ballots vote in question to Ross Miller. 94 adjudicated ballots went for Ross Miller and 44 went for Stavros. BTW Miller only led by some 10 or 15 votes. Stavros is seeking a special election in the NV Supreme Court. BTW Joe Gloria testified before the Clark County Commission that because of 139 vote discrepancies he could not determine the outcome the race and requested  a special election for the Clark County Commission C race.

Because the Dems setup the mail in ballot system to permanently separate ballots from the envelopes, there’s no way to go back and ask the voter whom he or she intended to vote for. Clark County’s processes to adjudicate ballots consisted of two staffers reviewing the ballots and correcting them by either filling in the circle so the Dominion Machine would read it or filling out a duplicate ballot.

Lisa Mayo told 360 News that Joe Gloria, the Clark County Elections Department Director, disclosed to her that there were at least 56,000 adjudicated ballots just in Clark County alone. According to the law, because the ballots are separated and the voter cannot be contacted to determine which candidate they intended to vote for, and because they failed to properly fill in the circle with their intended candidate, that vote should be thrown out.

In the 2000 Florida recount, the Broward County Elections Board, made up of Dems and Republicans, together reviewed thousands of ballots where the voter failed to properly choose their candidate leaving hanging chads or they crossed out one name and marked another. The U.S. Supreme Court, in Bush v. Gore, stopped the counting of adjudicated ballots and Bush won Florida and the Presidency.

Unelected bureaucrat Joe Gloria unlawfully determined the voter intent of some 56,000 adjudicated ballots in Clark County violating Bush v. Gore. In the June primary, Gloria’s office admitted they tossed some 10,799 ballots. No one knows how many ballots Gloria tossed in the November General election. No one from the Trump Campaign has examined any of the 56,000 adjudicated ballots or any of the tossed ballots.

The following data was provided by Lisa Mayo “I had never heard of or was aware of the adjudicated ballot or the process until the recount. I have spent countless hours analyzing and re-analyzing the 139 adjudicated ballots in the District C race. The result is I have many questions and the transparency of these ballots is essential in evaluating the final outcome of any election.” 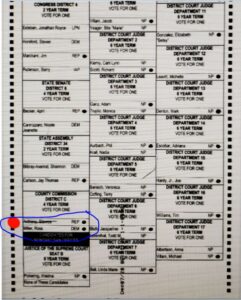 You see the ballot was rejected for the “Over-Vote” reason. Both candidates marked. The votes at this stage are not counted. 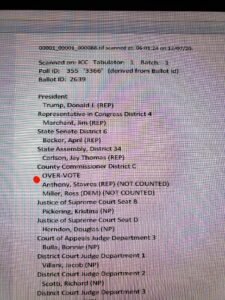 This is the “adjudicated” result. As you can see the vote was removed for Stavros Anthony and Ross Miller got this vote.
The “intent of the voter” appeared to be for a Republican based on the top of the ballot, but  we assume the “line thru the name” prompted the decision. 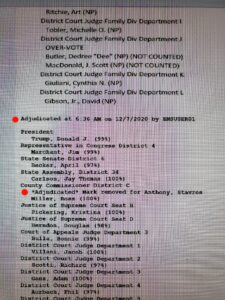 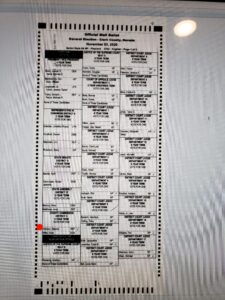 This is an example of how a ballot that has only a check mark or an “x” is kicked out. 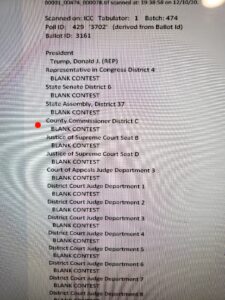 Those ballots that have an X or where the red bubble is not filled in completely, is kicked out with a “No Contest” message. 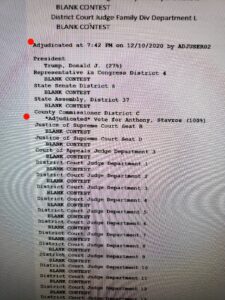 This ballot was pretty straight forward, and counted for Stavros Anhtony. 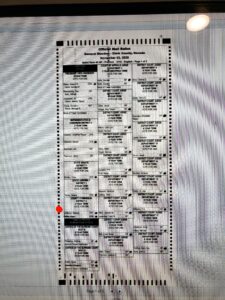 This ballot has all DEM votes on the top of the ballot, but Ross Miller is lined thru. 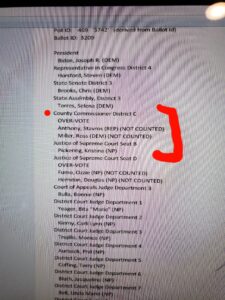 Once again the ballot is rejected as an “Over-Vote”. 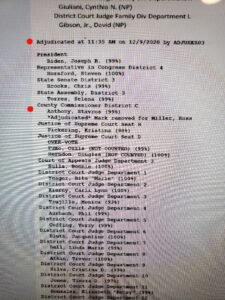 The line was thru Miller. Is that the known intent of the voter?