WHY ARE PUBLIC OFFICIALS TRYING TO BAN PICTURE TAKING AT POLLS? WHAT ARE THEY TRYING TO HIDE?

WHY ARE PUBLIC OFFICIALS TRYING TO BAN PICTURE TAKING AT POLLS? WHAT ARE THEY HIDE? 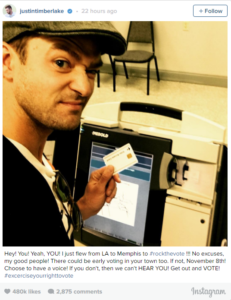 Justin Timberlake recently snapped a selfie while voting in Tennessee and is now the subject of a criminal investigation. The penalty for snapping a photo in a voting booth is up to 30 days in jail and $50 fine.

Here in Nevada you can’t even observe voting without the consent of the poll supervisor after filling out a bunch of paperwork. In fact, its against the law in Nevada for observers to have cellphones while observing. Thats posted right on Clark County Elections Department website.

“Photograph, Videotape or Sound Record Voting
A member of the general public may not make a visual or audio reproduction of the conduct of voting at a polling place. Cameras, audio recorders, video cameras, etc., must be deposited with the Team Leader. Owners may retrieve their property when they leave the voting area.”

Obviously the secret ballot protects the freedom of the individual and is the key to our republic’s security. We don’t want people feeling intimidated when they vote. I get it.

But why does the government shield the voting process from any video or photographic records? The fact is government officials maintain a secretive hold over the process and even block the media from inspecting voting machines and the people who are in charge of the machines. The level of corruption in our government has only fueled conspiracies about rigged elections. Complete transparency is the only cure for our citizens legitimate concerns.