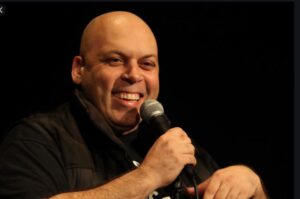 I’m a Palestinian Arab American. My father is a Palestinian Christian. My mother is a Palestinian Muslim. (They’re hippies, obviously.) Both of my parents were driven from their birthplaces of Yafa and Akka by Israel. After my birth in Jordan, I grew up in the suburbs of Philadelphia, Pennsylvania. I then attended college, graduate school, and law school in Michigan. I then became a comedian. My mom still tells people I’m a lawyer.

I now live in Dearborn, Michigan, home to the largest concentration of Arabs and Muslims anywhere in the United States. It’s the only place in America where you can eat a delicious shawarma, drink thick coffee, smoke a tasty shisha, and then chant “Free, Free Palestine” with hundreds of your friends, all in the same afternoon. It’s the Arab Disneyland.

I’m also a national surrogate for presidential candidate Bernie Sanders. No, that doesn’t mean I’m having his baby. It means that I campaign on the candidate’s behalf whenever asked to do so. Yes, I am a Palestinian volunteering countless hours of my time for the old, Jewish guy running for president. And I’m proud as hell about it.

Four years ago, Arab Americans in Michigan put Bernie Sanders over the top. Reviews of polling stations in Dearborn showed that Arab Americans there voted at a ratio of 3-1 for Sanders over Hillary Clinton in the 2016 Democratic primary. Roughly 400,000 Arabs live throughout Michigan. Sanders won the state by 17,000 votes.

I was a political activist on the ground then, and I am now too. Back then, and still today, reporters routinely call me with a strikingly similar line of questioning:

“Can you explain how Arab Americans are supporting the Jewish candidate for president?”

He routinely outlines how American foreign policy must reflect not only an emphasis on the welfare of Israelis, but also, just as equally, on the welfare of Palestinians as well. The deplorable humanitarian situation in Gaza is frequently a focus of his remarks. And he doesn’t revert to the old line of “It’s all Hamas’ fault.” The responsibility for the Gaza blockade, which has caused immeasurable suffering for the two million residents of that land, lies at the feet of the Israeli government.

He reiterated these sentiments Tuesday night at a townhall meeting in Nevada, saying, “I feel strongly about it, as someone who is Jewish, and knowing how much our people have suffered over the years, take a look at what’s going on in Gaza right now,” detailing the astronomic unemployment and inhumane immobility of Gazans.

In that same event, he also declared, “To be for the Israeli people and to be for peace in the Middle East does not mean that we have to support right-wing racist governments that currently exist in Israel.” He stated his vision of bringing Palestinians and Israelis together “under a banner of justice.”

This type of rhetoric is simply unheard of in American presidential politics. And Bernie is able to wade into this area, in large part, because he is Jewish. That has not, however, stopped pro-Israel groups from going after him. A year-old Super PAC named “Democratic Majority for Israel” is running ads against Sanders. That political action group has, according to reporting by The Intercept, close funding, messaging and institutional ties with AIPAC. Sanders, of course, has not backed down.

In 2016, Palestinian and Arab American activists made a bet on Bernie. We urged his campaign to speak about justice for the Palestinians. We promised our support in return. He did it, and we delivered. And we are delivering again.

In this American election cycle, watch for us hairy, crazy Arabs to vote for the old Jewish guy. It’s just natural.