When Do All Votes Matter?

When Do All Votes Matter? 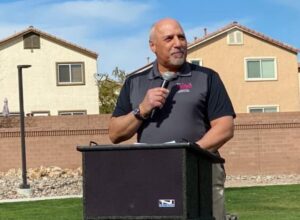 These 139 discrepancies are not being proclaimed as fraud or cheating in any Trump-like allegation. No, these are documented discrepancies that the Clark County Registrar of Voters self-identified and forthright explained that in a race as close as this race, he could confidently declare a winner.

Indeed, it would be unfortunate if this election, which would place a Republican on the most powerful board in the state, was overshadowed by an all-Democrat County Commission’s failure to protect the right to have your vote counted. Or a Judge who seems to read the statutes very narrowly and not broadly as we think they were intended. The future of elections in Nevada are at stake in the race for District C.  Unless we confront the issues of duplicate ballots, and irreconcilable discrepancies, and adhere to the professional opinion of our Clark County Registrar who testified in an affidavit, and in a public meeting, that he could not certify the District C race, we will leave a legacy of voter suppression and disenfranchisement that will define the future by casting doubt on the validity of the results in every campaign of every subsequent election cycle

In the July Nevada Special Session, the State Senate approved a controversial bill to provide for a mostly mail-in election in November. Republicans objected concerned about the potential for fraud, ballot harvesting, and delayed counting of ballots.

As a result, the Clark County election system was overburdened with mail ballots. In fact, the number was 10-times greater than any number in prior elections. After counting 153,162 votes in District C, the margin of victory was .0000653 or 10 votes for Miller.  However, there was a discrepancy of 139 ballots, which could not be accounted for and on November 16, 2020 the Clark County Commissioners voted 6-1 to acknowledge and accept the professional and trusted opinion of the Registrar and asked for a Special Election.

Then politics took over.

My opponent, Ross Miller, a lawyer, was quick to file legal action, and in the span of 15-days, the care and diligence the commissioners opined in the prior vote vanished and while nothing changed in the vote count or the 139 discrepancies, they voted 7-0 to reverse their decision to hold a Special Election and certified the election.  And in one motion and vote placed the financial and exactitude of the election on me.

I paid for a recount, whereby the margin of win difference went from 30 votes on Friday, December 11 at 2:30 pm with the culprit being 74 missing ballots to a 15 margin for Ross on