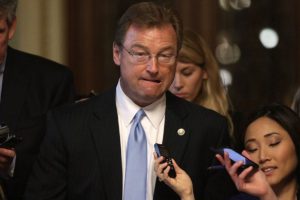 After failing to repeal Obamacare, Sen. Heller voted today to block Trump from making any recess appointments when he leaves this week for his summer vacation.

That’s right folk, Sen. Heller voted to leave Washington D.C. on vacation after failing to pass Healthcare reform. While the Senate is in recess, a President can make appointments under the U.S. Constitution. So the Senate passed a bill which leaves the Senate in session while they are gone playing in the summer sun. Do you recall Sen. Heller or other Republicans acting like this when Obama was President?

One would think Senate Republicans would want to help President Trump make recess appointments because the Democrats have slow walked his people on the hill. Sen. Heller is facing a tough re-election and a possible primary challenger. McConnell has promised to support Republican Senators against any primary challengers. So they don’t think they need President Trump’s support going into the primaries in less than 5 months from now. Time will tell.