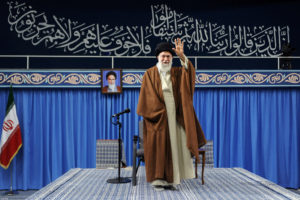 But we must do far more than talk. For we hold an unfortunate place in the history of the rise of the Ayatollahs. President Jimmy Carter directly supported the overthrow of the U.S. backed Shaw in the 1970’s. So today we have a duty to clean up Carter and Obama’s good intentions. Today the unarmed people of Iran must be armed and equipped to repel the largest supporter of terrorism in the world, the Iranian government. We must provide air support and do everything in our power, short of invasion, to rid the world of this scourge. Now is the time to rid ourselves of a future nuclear-armed Iran.

Imagine arming a couple million freedom seeking protestors in Iran with Ak-47’s and other weapons to get rid of the Ayatollahs once and for all. We should drop in well trained Iranian Americans to equip and lead a rebellion, with air support from the U.S., just as Trump successfully did in Iraq against ISIS last year. By supporting the second amendment in Iran, we help people win their own freedom just as we did over 240 years ago with the help of the French. To all those who say we should just mind our own business, that would be fine if Iranians weren’t chanting death to America daily, while frantically building nuclear weapons and arming our enemies throughout the world.