WARNING: MOST GRAPHIC PIC OF VEGAS MASS SHOOTING EVER PUBLISHED 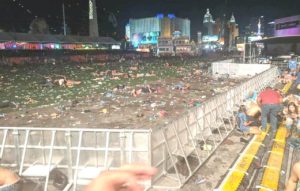 After Sheriff Lombardo refused to release all the videos once again this week from the Route 91 Mass Shooting after the NV State Supreme Court order him to release all of them, unedited, 360 News Las Vegas was contacted by one of the Vegas Mass shooting victims. They were deeply upset at Sheriff Lombardo’s continued effort to sweep the murders under the rug, in their opinion. They sent us this picture along with several more extremely graphic photos from the night of the shooting. The picture was taken by a cell phone, clearly showing numerous dead bodies strewn across the concert grounds. The picture looks more like a scene from World War I instead of a concert where people were celebrating life just minutes before suddenly dying very violent deaths.

The Vegas Mass Shooting victim wants the world to see what really happened and to make sure people never forget those who died and those who were forever changed on that horrible night.

Click the link to open the picture wide open: