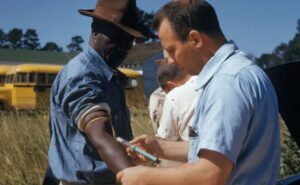 The Democrat Party loves to call all things they dislike racist, but when it comes their history their memory seems to lapse. Not long ago, Democrats and eugenics experimented on Blacks with vaccines. History gives many Blacks in America pause to believe the government is here to help. Perhaps that’s why only 30% of Blacks in America are vaccinated against CV19 today?

According to the CDC, in 1932, the USPHS, working with the Tuskegee Institute, began a study to record the natural history of syphilis. It was originally called the “Tuskegee Study of Untreated Syphilis in the Negro Male” (now referred to as the “USPHS Syphilis Study at Tuskegee”). The study initially involved 600 Black men – 399 with syphilis, 201 who did not have the disease. Participants’ informed consent was not collected. Researchers told the men they were being treated for “bad blood,” a local term used to describe several ailments, including syphilis, anemia, and fatigue. In exchange for taking part in the study, the men received free medical exams, free meals, and burial insurance.

The United States Supreme Court decision Buck v. Bell, 274 U.S. 200 (1927), written by Justice Oliver Wendell Holmes, Jr., ruled that a state statute permitting compulsory sterilization of the unfit, including the intellectually disabled, “feeble minded” and blacks “for the protection and health of the state” did not violate the Due Process clause of the Fourteenth Amendment to the United States Constitution. Bell resulted in some 70,000 forced sterilizations. Buck v. Bell was used to justify upholding the Jacobson decision from 20 years earlier, which allowed state compelled forced vaccination. “If the government can force sterilize it can force vaccinate”.

The Nazis picked up and ran with the American eugenics concepts in the 1930’s. Jews were deemed a lesser race and should be eliminated along with the feeble minded.

In 1976, the CDC claimed there was an outbreak of the Swine Flu, (the Spanish flu bug from 1918) and authorized some 94 million Americans get vaccinated with an experimental unproven drug. The only problem was, there was not outbreak and the vaccinated killed hundreds of Americans and injured thousands.

So Blacks and the rest of us should not trust that our government cares about our well being when they coerce citizens into getting the jab against their will. Today, less than 30% of Blacks are fully vaccinated in America yet, according to the CDC official data, they have the lowest infection and death rate of any race in America. 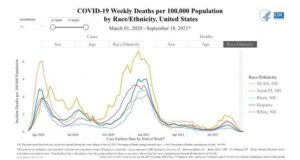