TRUMP: ITS MY DECISION NOT SISOLAK’S TO RE-OPEN THE ECONOMY

TRUMP: ITS MY DECISION NOT SISOLAK’S TO RE-OPEN THE ECONOMY 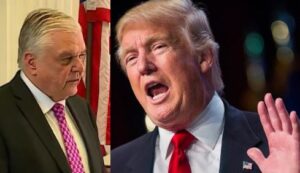 “For the purpose of creating conflict and confusion, some in the Fake News Media are saying that it is the Governors decision to open up the states, not that of the President of the United States & the Federal Government. Let it be fully understood that this is incorrect. It is the decision of the President, and for many good reasons. With that being said, the Administration and I are working closely with the Governors, and this will continue. A decision by me, in conjunction with the Governors and input from others, will be made shortly!”

Over the weekend on the Sunday morning News shows, several Democrat Governors floated keeping their states quarantined until June.