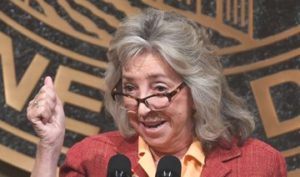 Yesterday in Washington D.C., Nevada Congresswoman Dina Titus sided with the extreme left wing of the Democrat Party voting to move forward with the impeachment of the 45th President of the United States of America, Donald Trump. Rep Susie Lee and Rep. Steven Horsford voted against moving forward with impeach exposing a civil war raging inside the Democrat Party between the AOC / Omar wing and the moderate Pelosi wing.

The Democrat Party’s civil war broke out into open warfare yesterday when 95 far left Dems, including Dina Titus, moved to impeach President Trump, while more moderate Democrats voted against their colleges.  332 members of Congress, including 137 Democrats and all the Republicans voted against moving forward with Impeachment.

Rep. Dina Titus was the only Nevada member of Congress to vote for impeachment, but Titus is refusing to issue a press release and or statement why she supports impeaching President Trump.