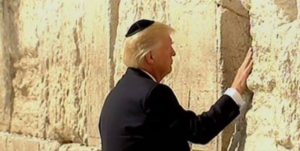 After President Trump’s successful visit and speech in Saudi Arabia over the last couple of days, he headed directly to Israel to meet with regional leaders.

President Trump visited the holy wall today, making him the first U.S. President in history to do so. While Trump is in town he will meet with both Israeli and Palestinian leaders in hopes of carving out a peace deal that has eluded the previous 6 Presidents since Carter.

The Western Wall is the most holy place accessible to the Jewish people because of Muslim control of the Temple Mount.  Known in recent centuries as the “Wailing Wall,” this was built by Herod the Great as the retaining wall of the Temple Mount complex.  The plaza was created as an area for prayer when Israel captured the Old City in 1967.  At times tens of thousands of people gather here for prayer.