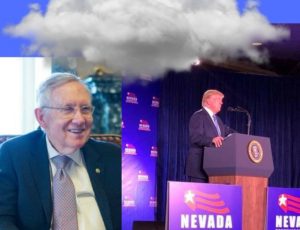 Even after almost a year of hard work and great results by the Nevada Republican State Party Director Greg Bailor, Nevada Democrats still have a 97,000 voter registration advantage.

As Reported by the Nevada Secretary of State’s office for May 2017:

As Reported by the Nevada Secretary of State’s office for May 2018:

As one can see, over the last twelve months the NVGOP increased their Registration numbers by 22,701 versus the Democrats increasing by only 14,807. And the demographic trends are not helping Republicans.

U.S Senator Dean Heller, who just one year ago was facing primary opponent Danny Tarkanian backed by a very pissed off Republican base, now boosts a Pro-Trump 90% voting record and has fully embraced the President.

Adam Laxalt who was just christened the Republican Candidate for Governor in the least competitive primary in the State’s history possibly will face off in the general election against Clark County Commission Chairman Democrat Steve Sisolak and Independent Candidate Ryan Bundy.

Even though Republican and Democrat voter turnout in the primary was comparable, the Harry Reid turn out machine wasn’t turn up to full blast yet. The 97,000 voter registration advantage Democrats have will be leveraged by the machine through Unions and Casino Hotels busing voters to the polls with candidate slates in their pockets.

President Trump gave a great speech yesterday throwing the Republican State Party delegates tons of red meat and motivating them to work together. NV GOP Chairman Mike McDonald was a rock star and his people did a great job. But if Republicans don’t double their efforts to fix the 97,000 voter registration gap and build of real GOTV operation to compete with Harry Reid and the Dems, by this time next year we will see our 2nd Amendment rights all but gone in Nevada. We will see higher taxes and schools choice wiped out. We will see Nevada become a Sanctuary State. If the Dems take control of the Governor’s mansion and the legislature the Republican Party may never recover.