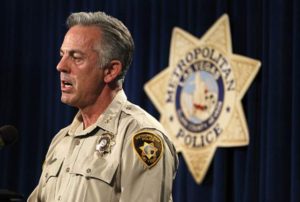 After four tumultuous years as Sheriff of the largest county in Nevada, Joseph Lombardo easily won reelection in 2018. Lombardo muddled through the October 1, 2017 Vegas mass shooting in the national spot light and saw crime spike under his watch to the highest levels in a generation. But no one came forward with the resources and support to take him on in 2018, clearing the way for Lombardo to sail into his second term today.

More politician than police officer, the rank and file voted not to endorse Lombardo for reelection but the powers that be fully back him. Now Lombardo’s number one supporter is about to be the new Governor of Nevada making Lombardo 2nd most power figure in the State today. BTW as long as he is alive, Harry Reid remains the number one most powerful figure in Nevada.

Today, Lombardo was sworn in for his second term as the 17th Sheriff of Clark County.