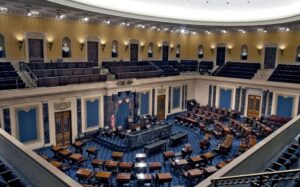 Article II Section 4 The President, Vice President and all civil officers of the United States, shall be removed from office on impeachment for, and conviction of, treason, bribery, or other high crimes and misdemeanors.

The Senate shall have the sole Power to try all Impeachments. When sitting for that Purpose, they shall be on Oath or Affirmation. When the President of the United States is tried, the Chief Justice shall preside: And no Person shall be convicted without the Concurrence of two-thirds of the Members present. Judgment in Cases of Impeachment shall not extend further than to removal from Office, and disqualification to hold and enjoy any Office of honor, Trust or Profit under the United States; but the Party convicted shall nevertheless be liable and subject to Indictment, Trial, Judgment and Punishment, according to Law.”

The founders were extremely clear when they wrote “Judgment in Cases of Impeachment shall not extend further than to removal from Office, and disqualification to hold and enjoy any Office of honor, Trust or Profit under the United States”. The sole purpose and consequence of conviction in the Senate for an office holder is removal from office, not criminal conviction nor prison. If a President is no longer in office, than the Senate has no jurisdiction over that person. The Senate cannot convict a civilian because they feel like. If there’s criminal offenses those can still be pursued by the Justice Department or other authorities. It’s pretty black and white. The Senate has never convicted a civilian of impeachment in the history of the country.

There’s no statute of limitations cited in the Constitution to impeach. So imagine if Congress can impeach past Presidents for wrong doing? Could Congress impeach President Grant for killing Indians, or President Lincoln for suspending Habeas Corpse during the civil war? Or maybe Congress could impeach Pres. Roosevelt for imprisoning Japanese Americans during World War II? Maybe we could Impeach Obama for his failure to respond to calls for help from Benghazi?

The real question is who has the authority to determine whether the Senate has jurisdiction over a civilian after they have left office, the Senate or the U.S. Supreme Court? It seems the Chief Justice of the Supreme Court has that power since he is assigned the power to “preside” over any such trial. Could Congress Impeach Obama for his failure at Benghazi or giving Iran billions of US taxer dollars without Congressional approval?

Either way, the trial of former President Trump will make history and set precedents for future impeachments.