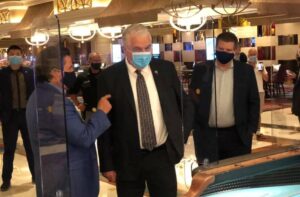 Even tho Justice Roberts once again betrayed the Constitution and the people who elevated him by crushing Christians’ human rights in his decision this week to allow Sisaolak’s edict to rein supreme over the 1st Amendment, dissenting Justices made the saliant point desperately needed right now.

Justice Samuel Alito, in a dissenting opinion joined by Justices Clarence Thomas and Brett Kavanaugh, argued that Sisolak had elevated casinos above churches. He wrote that the state has, for months, imposed “unprecedented restrictions on personal liberty,” including the freedom of religion.

“The Constitution guarantees the free exercise of religion. It says nothing about the freedom to play craps or blackjack, to feed tokens into a slot machine, or to engage in any other game of chance,” Alito wrote. “But the Governor of Nevada apparently has different priorities.”

“That Nevada would discriminate in favor of the powerful gaming industry and its employees may not come as a surprise, but this Court’s willingness to allow such discrimination is disappointing. We have a duty to defend the Constitution, and even a public health emergency does not absolve us of that responsibility.”