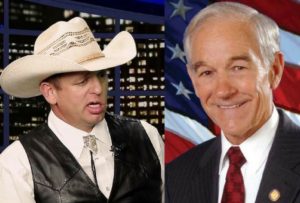 Ron Paul has said he would make up his mind shortly and announce his level of support for Ryan Bundy. Any kind of endorsement from Ron Paul and his 1.3 million followers on Facebook could be a huge boast to Ryan Bundy’s campaign for Governor.

Bundy announced he was running for Governor of Nevada just a couple months after being released from jail after waiting some two years for trial over his family’s dispute with the BLM.

The Bundys believe the 86% of Nevada’s land currently owned by the federal government should be returned to state.

Ron Paul has huge support among the libertarian leaning Republicans across the state. Nevada is known for being independent with its history of supporting gambling, brothels and now cannabis.