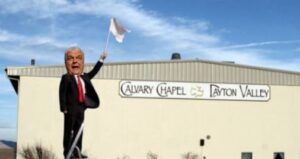 Last year, Sisolak limited every church, regardless of size and capacity, to 50 people for services while allowing casinos and strip clubs to open to their full 50% capacity. The court found Sisolak’s more restrictive rules for churches should have been consistent with other businesses like casinos.

Joey Gilbert and Sigal Chattah represent Calvary Chapel Lone Mountain. Just days before Christmas, on Dec. 15, 2020, the 9th Circuit ruled unanimously in favor of the Church allowing it to reopen for Christmas. Sigal told 360 News she is moving forward with a jury trial. A trial that may pit Sigal, who is running for NV Attorney General, against sitting Nevada Attorney General Aaron Ford in the middle of an election year.

Joey Gilbert is running for Governor of Nevada.