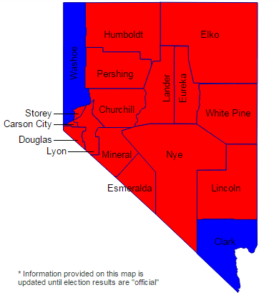 As one can see from the 2016 general eleciton map above, 14 counties voted straight Republican while Clark and Washoe Counties voted Democrat. The fact is, yes Democrats received 2.3% more votes statewide than Republicans, with the winning margin coming from just 1 county, Clark. And with all that, Democrats still barely won the blue counties. Yet Democrats get to dictate to 14 other counties how they are governed and who governs them. It doesn’t seem quite fair.

What if instead Nevada had an electoral college where ballot questions, the governor and Presidential elections were determined by who won the most counties instead of just votes? Counties could be assigned points based upon population but counties would have more equal standing, compelling leaders and candidates to visit and listen to more people and their needs. 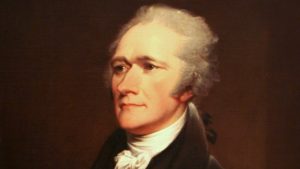 So will the same liberals who flock to Broadway’s Hamilton Play, heed the real Hamilton’s great wisdom and insight which is as true today as it was 240 years ago?

Every sheriff in the state, except for Clark County’s Sheriff, opposed Question 1, the background check law. But in the end, Question 1 only won by 10,000 votes out of 1.2 million cast. During Govenor Sandoval’s time in office he has called 3 special sessions to purpose job bills that only benefited Washoe and Clark Counties. Clark and Washoe counties are vital to the economic health of the state’s budget and their voting blocks drive political decisions, but if we had an electoral collegelike system the rest of the counties would see some focus on their issues and challenges. They are not just ignored but the target of those who want to strip them of their water and land rights. There is a real danger to those 14 counties of losing economic and civil rights as an electoral and geographic minority. An electoral college system in Nevada would protect everyone’s civil rights from the tyranny of the majority that Alexander Hamilton wrote about when proposing the elecatoral college sytem we elect the President with.

When one looks at the the sea of red on the election map above, one must ask, are we, here in Nevada, truly governed by the consent of all the people?