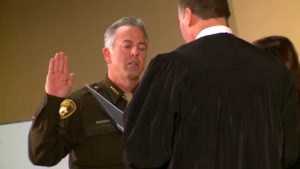 Back in 2014, Clark County Sheriff Doug Gillespie, announced that Las Vegas Metro Police would no longer cooperate with Immigration and Customs Enforcement, or ICE, by holding criminal illegal aliens with detainer holds for deportation. But after soaring crime, a doubling of the murder rate in Clark County last year and intense public backlash against Metro’s sanctuary city policies, Sheriff Lombardo announced he was reversing that policy and will now work with and honor ICE detainer holds.

Following the election of President Trump and intense public pressure, Sheriff Lombardo has reversed several policies, including reconstituting the central gang task force and now deporting criminal illegal aliens with ICE detainer holds. Crime statistics are still moving in the wrong direction with over 39 homicides this year already. 2016 saw the highest number of homicides, 168, in the past 30 plus years. Lombardo says with his ambitious plan to graduate a record number of new police recruits, more cops on the streets will bring down the crime rate soon.

But with President Trump ordering a weekly shaming list to be published consisting of counties throughout the country that fail to turn over criminal illegal aliens to ICE, Clark County was number 1 on the walk of shame list this week. With the threat of losing federal funding if Metro doesn’t clean up its act, Sheriff Lombardo publically defended his department’s actions this week claiming he is now working with ICE and admitted the policies of the past were a mistake that they have learned from.

But Sheriff Lombardo continues to send mixed signals to the public, telling an audience at a recent immigration townhall with Sen. Cortez Masto that Metro would not be actively enforcing immigration law, even though it receives funding as part of the Section 287(g) program.

The federal program administered by Homeland Security requires, in exchange for funding, that local police departments enforce immigration law. So if Metro fails to clean up its act the Trump Administration will cut off desperately needed federal funds. With Lombardo facing an uphill battle for reelection next year, he appears be making moves to shore up his political support by publically announcing major changes in several policies at Las vegas Metro Police Department. Actions speak louder than words, so only time will tell if Lombardo comes through on his promise to change.