Scary Mary Marshall-Lang tried to fool Republican voters last year when she announced she was running for Clark County School Board. But 360 News Las Vegas exposed the truth about Scary Mary. She’s really a closet Democrat and her husband is on the board of the Teachers Union for Clark County School District. The same teachers Union that just endorsed Radical Democrat Socialist sex perv CCSD Prez Irene Cepada.

Scary Mary was run off from the School Board race and is now running for Clark County Treasurer as a Republican. Except this Republican has the Democrat Clark County Chairman Jim Gibson’s endorsement.

So here is her new fraud case. Keep in mind Scary Mary claims to be a highly educated educator that CCSD passed over because she was too smart. On her April 15, 2022 NEVADA FINANCIAL DISCLOSURE STATEMENT section 2, she was supposed to list her husband’s employers, the Clark County School District and or the Teacher’s Union. But she simply put “spouse” instead as if she didn’t understand what to fill in. Scary Mary is still trying to hide her husband’s position as a Teachers’ Union Leader from Republican voters. Her failure to disclose her husband’s position under penalty of perjury directly violates Nevada law, NRS 281. 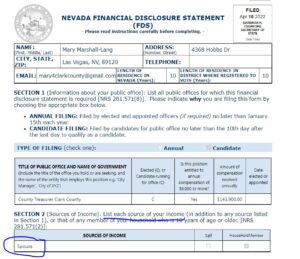 Scary Mary is running against Kevin Child in the Republican primary for Clark County Treasurer.