ROB’S RANT – HOW I SURVIVED A GUN SHOW

ROB’S RANT- HOW I SURVIVED A GUN SHOW 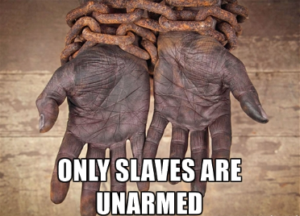 I went to a gun show this last weekend. And for two straight days I was surrounded by over 1,000 guns. Can you believe it, not one person was murdered, not one person was robbed, not one person was shot. Yet in Chicago, over the same couple of days, eight people were killed and at least 39 others were wounded in shootings. There have been over 2,000 shooting in Chicago this year alone. A city with absolute gun control. Liberals like New York Mayor Bloomberg blame the NRA, they blame gun shows, they blame me and you for their failed policies of welfare and failed schools. Policies that have trapped people in poverty and despair. Policies that have robbed people of self worth. Stop blaming guns and start blaming yourself Mr. Bloomberg for the broken lives and broken hearts of a generation of people your policies have killed. Surrendering our freedom and universal right to defend ourselves will not make the streets of Chicago any safer. It just makes us all slaves to the state.

So this weekend, I am going to the Crossroads of the West Guns Show where I expect to see over 5,000 guns and 10,000 people celebrating their freedom. Join us at the Town Hall NEWSMAXTV LAS VEGAS and the NRA are hosting Saturday 10am to 11am at the Cashman Center and speak up and speak out.