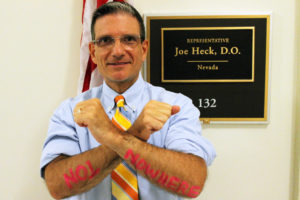 With a $5 million war chest, a sitting Republican Govenor and all the power of incumbency, the Nevada Republican leadership was slaughtered in the race for the White House, the State House, the US Senate and the Congressional races. They even lost all the ballot measures.

Where was Governor Sandoval? I never saw him campaign for our Republicans during the general election. I saw the Democrats use him in their TV ads. Where was US Senator Heller? Remember that next year when he runs again. These two did more damage to the Republican brand that Harry Reid ever could have.

They lost the race before it ever began. They lost when they abandoned Republican principles and tried to one up the Democrats by supporting tax increases and Obamacare, destroying our brand in the minds of the voters. They lost when the State leadership failed to use their power to institute election reforms like voter ID and driver licenses for illegal aliens. The Democrats used welfare offices to register hundreds of thousands of new voters. The Republicans lost the election before it began with a huge voter registration deficit when they failed to register enough new voters.

And especially the Republican State Assembly leadership failed to keep their key people like Derek Armstrong, David Gardner and Silberkraus who all ran as RINOS.  And to drive the point home, Jim Marchant won his race in a district he should have lost in the blue wave. Assembly District 37 was held by the Democratic Assembly Speaker just a few years ago and in this Democratic wave election here in Nevada it certainly should have gone blue as well. But Jim Marchant’s victory here in Clark County stands out from the dead and wounded in our party.

Jim ran as a low tax “Reagan Conservative” supporting God and guns and opposing transgender bathrooms. Jim didn’t run to the middle or try to appease the left. He signed the no new tax pledge, gutted his Republican rival in the primary then destroyed the Democrat nominee by over 4 points. His rival Sean Lyttle was no slouch. He is a trial lawyer with all the union money backing him, in Clark County, with a voter turnout advantage in a Presidential election year.

The lesson is, voters value candidates who stand up for what they believe. The Republican brand works when used and not abandoned. And Jim actually worked his butt off knocking on doors and raising money. The minute Joe Heck and the rest of the Republican leadership abandoned Donald Trump they lost the election in Nevada. When the sitting Republican Govenor, the sitting Congressman and the sitting US Senator all oppose the Republican nominee for President what do they expect to happen? Donald Trump proved, standing up for what you believe, not backing down works. Elections are won by defining yourself and defining your political opponents, period. Protecting and defining the Republican brand will drive voter registration and deliver election victories as it has since Abraham Lincoln, the first Republican President.