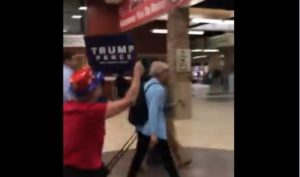 Last Wednesday, U.S. Senator and leading Presidential Candidate, Elizabeth Warren was met at the Reno Airport by Republican protestors shouting at her to stop the impeachment of President Trump and to “Go Home”. This led to the Reno Airport Authority Spokesman Brian Kulpin to immediately issue an apology through the Airport’s official Twitter account. But that wasn’t the end of the issue.

The NVGOP fired back accusing the Reno Airport Authority of having a double standard. According the NVGOP, the Reno Airport Authority issued no such apology after Senator Heller was met by Democrat Protestors last year. Jeremy Hughes, Trump’s Las Vegas-based regional political director fired back through Twitter “We won’t stand for your hypocrisy. Can’t wait to see who thought this was a good idea.” 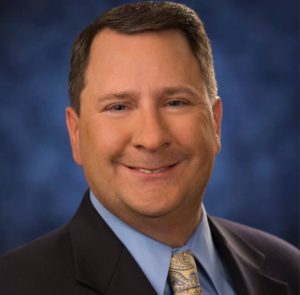 This isn’t Reno Airport Authority Spokesman Brian Kulpin’s first brush with Republicans. In 2016, Reno Airport Authority Spokesman Brian Kulpin defended the Airport displaying Colin Kaepernick’s memorabilia from his days at the University of Nevada. “It’s the only thing in the public eye that is a shrine to Colin Kaepernick,” Kulpin said 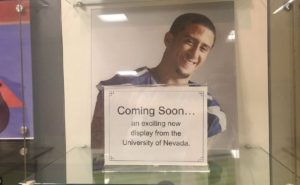 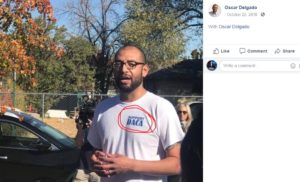 .@RenoAirport Authority apologizes to @ewarren for the group of protestors on 10/2 in violation of airport policies. Airport Police weren't given prior notice of the arrival. Protestors didn't follow the permit process & the airport's attorney will be investigating the incident.

“While these events were different in tone and vitriol, they both highlight the need for the protest policy to be better enforced, Airport police, security and operations personnel will increase their vigilance in the coming weeks to be better prepared for the intense political season ahead.” 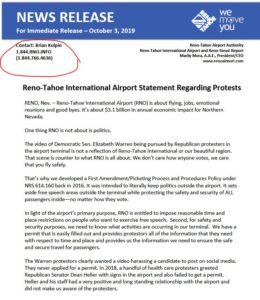