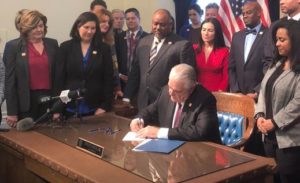 Yesterday, Governor Sisolak signed AB291, the Red Flag law, that gives police and crazy ex’s the power to take away your guns without as so much as a hearing. In fact, the law does not require a medical professional to evaluate the person or even testify. The judge can rule solely on hearsay testimony or a form submitted by police or a social worker.

Veterans have been targeted by these laws in other states. In fact, hundreds of thousands of Veterans have lost their gun rights without due process pursuant to a comparable procedure through the VA. And  fewer than 50 have successfully invoked this “process” to get their rights back.

The first time gun owners learn there is a court order to remove their guns is when the police knock on their door with a SWAT TEAM. This has already resulted in the deaths of law abiding gun owners across the country. Next the gun owner will need to hire a lawyer and spend thousands of dollars to fight in court to get their rights back.

SB291 is far more intrusive then you think.

DONATE NOW AND FIGHT BACK: