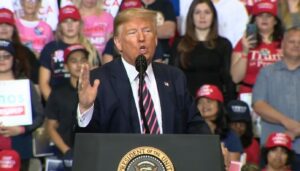 Today, at the Las Vegas rally, President Trump expressed deep concern about the vote count in the Democrat Nevada caucus. Pres. Trump compared the mess in Nevada to what occurred in Iowa, who still has not announced a final vote count from two weeks ago.

“The Nevada State Democratic Party is contacting early voters with voided ballots by phone and text. You will be given the chance to vote again in your precinct on Saturday, February 22nd. If you are contacted, please check your precinct number (on your voter registration card) and your caucus location. Plan to be there at 10 am for registration.”

After Nevada Dems screwed up early voting by voiding some 1,400 votes, a new issue has come to light. Only in Las Vegas can the candidate coming in 3rd place win the Nevada Caucus. When Democrats caucus in Nevada this Saturday and in early voting, the must select their 1st, 2nd and 3rd choice for President. So if the 3rd choice is Joe Biden ganders 60% of the voters, but Sanders only got 25% on the first round, and the 2nd round is divided up among the 7 candidates, then Biden could win with the most votes cast in 3rd place.

That’s right folks. One of the reasons 1,400 votes were voided last night in Clark County, is that those NV Dem voters didn’t make a 2nd and 3rd choice selection.