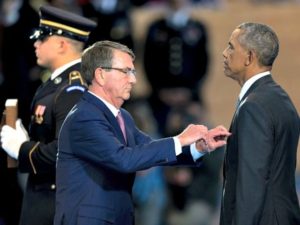 Today in Washington D.C., President Obama awarded himself the Dept of Defense Medal for Distinguished Public Service. Defense Secretary Ash Carter pinned the medal on his boss today at a ceremony at Fort Meyer. After showing such bravery for launching “Gay Pride” month in the Armed Services every June and opening our military up to transgenders, Obama deserves his participation award for showing such courage. Afterall, Obama slept through the attack on Benghazi, woke up and went to Las Vegas to campaign for reelection showing the world what kind of commander in chief he truly is. So it’s only fitting that Obama award himself a medal for his distinguished public service. Obama has set the bar for all us pitiful average peasants to live up to, to strive for and to hope one day we too can do so little for so many.