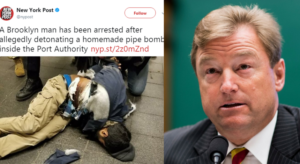 Today, as America watches another radical Muslim terrorist bomb Americans in the streets of one of our cities, we learned he entered the U.S. legally seven years ago without any real vetting. NYPD named, Bangladesh national, Akayed Ullah as the Port Authority attacker in Manhattan, who entered the US 7 years ago, according to reports.

President Trump signed an executive order, following his inauguration in January 2017, to put a temporary halt to refugees and immigration from countries Congress declared serious sources of terrorism. President Trump asked for time to set up a better vetting process to prevent terrorists from entering the U.S. Sen. Heller publicly opposed Trump’s efforts.

“I agree that better vetting and border protection measures are necessary. That’s why I support the thorough vetting of individuals entering our country. However, I am deeply troubled by the appearance of a religious ban. The use of an overly broad executive order is not the way strengthen national security. I encourage the administration to partner with Congress to find a solution.”
(Source The Hill January 30, 2017)
.
The Supreme Court finally signed off on President Trump’s executive order last week after a few modifications.