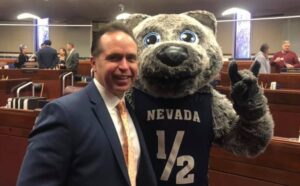 The Nevada Families for Freedom issued an alert today about RINO Tom Robert’s purposed law, AB129 describing the it as follows:

“This bill lowers the reporting threshold from $1000 to $100 for Political Actions Committees including RECALL committees and Ballot Question Initiatives. This means that if the Powers that Be oppose what you are doing, they will know who is supporting your cause and how much they are giving. This hurts conservative causes like Nevada Right to Life and Nevada Firearms Coalition. This makes you a TARGET for political intimidation and reprisal.”

In California a few years ago, everyone’s addresses who gave to a conservative cause via a PAC to keep marriage between a man and a woman was put on a Google map so that opponents could more easily target them. This resulted in threats, bullying, vandalism and intimidation. As a result of this, I asked our Legislature to increase the threshold from $100 to $1000, which they did. AB129 changes that.
.
In Nevada recently, we had a Recall Sisolak petition campaign. If AB129 passes, anyone who gives cumulatively $100 to a Recall campaign in the future would have their name reported to the Secretary of State and their name and address would be online and accessible. AB129 requires reporting whether the campaign is successful or not. This exposes patriotic Nevadans to threats, intimidation and retaliation. AB129 will suppress and stifle Political Free Speech. That is the purpose of this bill!
.

In today’s cancel culture, liberals will simply be able to look you up online and see that you gave to Pro-Trump groups and fire you or just not hire you.

Tom Roberts is one of the most liberal Republicans in Nevada. So it’s no surprise that he’s the one behind this Never Trump law.

HEARING: Tuesday, February 23, 4:00pm,
Assembly Legislative Operations and Elections Committee
To PARTICIPATE in the hearing by giving testimony for 2 minutes: https://www.leg.state.nv.us/App/NELIS/REL/81st2021/Meeting/8832?p=1008832
You can also submit written opinions on the bill at this link.
To Watch the Hearing: https://www.leg.state.nv.us/App/Calendar/A/
Go to Day, Time and Committee and click on: View Events.