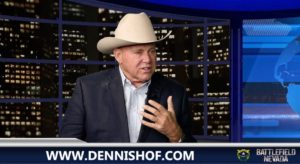 Last night the Republican Assembly Caucus had a phone conference with its members and they voted not to endorse Dennis Hof after he defeated James Oscarson in this week’s primary.

The assembly Caucus issued the following statement “The Assembly Republican Caucus will not endorse or support any candidate in Assembly District 36.”

Dennis Hof said in a statement to 360 “I did not seek the endorsement of the Republican Caucus because of the number establishment owned tax hikers. The only endorsement I want is from the voters of Assembly District 36.”