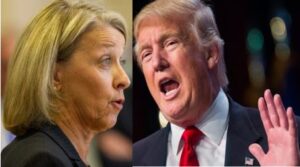 In an open letter from President Trump and the NV GOP to the the Republican Secretary of State Barbara Cegasvke:

Donald J. Trump for President, Inc. and the Nevada Republican Party sent a letter to Nevada’s Secretary of State Barbara Cegavske requesting she ensure transparency from the Clark County’s elections department after Registrar Joe Gloria prohibited the public from observing certain areas where ballots are being reviewed and handled in the county’s office.

Additionally, Gloria has restricted observers within the office so that they cannot meaningfully observe the process.

You can read the letter here.

Gloria’s blatant disregard for accountability and transparency in the ballot counting process infringes on Nevadans’ right to observe its electoral process, and as the letter to Secretary Cegavske states, the Nevada Republican Party is prepared to remedy this issue in court if Clark County continues to break the law.

“Clark County’s refusal to allow accountability and transparency into an election system that was created at the 11th hour, with less than 100 days until Election Day, weakens trust in the electoral process and puts the integrity of the results at risk,” said Nevada Republican Party Chairman Michael J. McDonald. “The public has a legal right to observe this process, and if Joe Gloria continues to refuse to allow that, we will be left with no other choice than legal relief.”

Clark County observers have noted multiple issues that have precluded them from
engaging in meaningful observation including, but not limited to:
1. Observers are being prohibited from observing the totality of the process. There are
certain areas where ballots are handled, reviewed, or the information therefrom is
utilized to affirm whether a ballot will be counted, but Clark County has deemed these
areas restricted and/or off limits to observers. One such area is the call center, which
has been deemed by Clark County as “off limits.” Given that these ballot review
processes are deemed necessary by Clark County in the counting of ballots, observers
must be allowed to observe. Simply put, the only way to assure transparency in the
process is to assure all parts of the process are subject to observation and scrutiny.

3.Unfortunately, Clark County has positioned
observers in such a manner that they cannot meaningfully observe. Notably, observers
are often located more than 30 feet away from certain processes, cannot see the
computer screens or monitors of individual workers, or observe calls made relative to
the cure processes being engaged in by Clark County in the counting of ballots.
Moreover, observers are required to be with “ambassadors” at all times, and there are
not enough observers to allow consistent observation of the process. Without
meaningful observation, there cannot be any assurance of transparency.