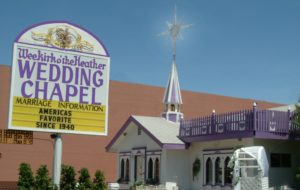 Carson City, Feminist Representative Shannon Bilbray-Axelrod (D) is the main sponsor of AB139, a bill touted as banning child marriage. As written, the bill, which passed the Assembly this week, would outlaw all marriages for anyone under the age of 18 years old, regardless if a parent consents or a court authorizes it as allowed currently under Nevada State law. To most people, that seems simple enough.

But, according to Assembly Republicans, the bill’s true mission is to attack traditional marriage and criminalize Wedding Chapels and churches that refuse to perform gay marriages.

“is hereby amended to read as follows.Two persons, regardless of gender, who are at least 18 years of age,”

“8. A commercial wedding chapel that violates any provision of this section is guilty of a misdemeanor”

AB139 is similar to the situation with the Colorado Bakery Owner who refused to bake a cake for a gay couple that the U.S. Supreme Court ruled in favor of. There are numerous wedding chapels and Churches who could be prosecuted if they refuse to perform gay marriages under this law. In addition, Democrats rejected all Republican amendments for member of the military deploying and religious exceptions sparking a mostly party line vote with Democrats mostly voting for the law.

The bill now goes to the Senate.