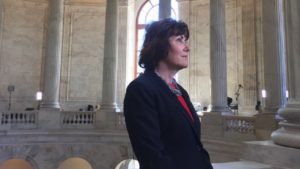 This week, Nevada Dem. U.S. Senator Jacky Rosen sent a letter to the Chairman of the Senate Committee on Commerce, Science, and Transportation asking for a hearing on why Women’s National Basketball female athletes are paid less than men in the NBA.

The NBA’s TV deal is worth $24 billion over 8 years just with ESPN. That does not include other TV platforms. The WNBA in 2013, signed a deal with ESPN that paid out only $12 million a year. The MGM owns the Las Vegas Women’s Basketball Professional team and can’t fill its 12,000 seat arena any most game days. Yet the NBA attracted over 200,000 to the MGM summer off season games.

The fact is that viewers can’t get enough of the NBA while the WBNA has failed to attract a large loyal audience.

Rosen ran for the U.S. Senate in 2018 after spending only 1 year in the House of Representatives. Before that she fixed computers. But the fact is Rosen is not stupid. She is attempting to appeal to soccer moms and stupid people, which we have our fill of here in NV.