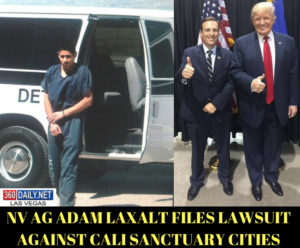 Laxalt joined Alabama, Arkansas, Florida, Kansas, Louisiana, Ohio, Oklahoma, South Carolina, Texas and West Virginia in filing his lawsuit. In filing a friend-of-the-court brief in the 9th Circuit Court of Appeals, Laxalt said: “the case is an opportunity to remedy the threat that California’s sanctuary cities pose to Nevada’s safety.” “It is common sense that dangerous felons should not be released into neighborhoods, and that law enforcement must work together for public safety. Sanctuary cities in California pose a danger to neighboring states like Nevada by making it easier for those not lawfully in this country and with violent criminal histories to evade law enforcement and travel out of state. What’s more, these cities undermine the rule of law and prevent cooperation between federal and local officials.”

Adam Laxalt has been endorsed for Governor by all the state’s sheriffs except Lombardo.