Governor Sandoval, Speaker John Hambrick, Assembly Leader Paul Anderson, Senate Majority Leader Michael Roberson skipped Nevada’s largest county GOP convention today with just over 2 months until the June 14th primary. With all the leadership except Gov. Sandoval on the ballot facing significant primary challengers it was surprising they all failed to stop in and say hi to their own party base.

Clark County was hit by a huge storm so they weren’t out walking in their districts, So where were Clark County Elected Officials?

Congressman Hardy and Congressman Heck, whose running to replace Senator Reid, both stopped by to give the GOP county leaders red meat speeches as is expected from elected officials in the middle of a heated national and state election cycle. The leader of the insurgency, Republican Assemblyman Brent Jones and most of the republicans challenging Governor Sandoval’s Establishment candidates were out if force gathering support from the Trump and Cruz convention goers.

Trump’s campaign brought new faces to the county convention and a new energy to the party with core issues like building a wall along the border, cutting taxes and regulations, stopping common core, issues Governor Sandoval and his Establishment continue to oppose here in Nevada. This might explain their failure to show up and face anger base voters who said they see them as the problem and not solution. Many of the Trump supporters expressed frustration with Governor Sandoval breaking his promise not to raise taxes by socking businesses with the largest tax increase in Nevada history.

The Clark County Convention room was about two thirds full, many sighted the two hour long line to check in for the low attendance, especially after the Republicans doubled the turnout at their January 20, Presidential Caucus over 2014 results. Of the 3,200 delegates elected in the January Caucus, only 1,200 showed up to the county convention Saturday. Considering the chances of a contested National Republican Convention is looking more and more likely with Trump and Cruz locked in a primary fight, these delegates will most likely select the Republican Presidential Nominee this summer in Cleveland. Anti-Establishment drove the historic attendance at the GOP County Convention. 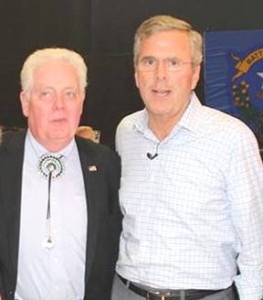 The republican primary in June is expected to have a low turnout. So the big question is will the base voters at the Clark County GOP Convention and their enthusiasm for Trump and Cruz and their anger at  Establishment elected officials translate into a victory for the Republican insurgent candidates bringing an end to the Nevada GOP Civil War?